Agoda: Top 10 Things to do in Osaka 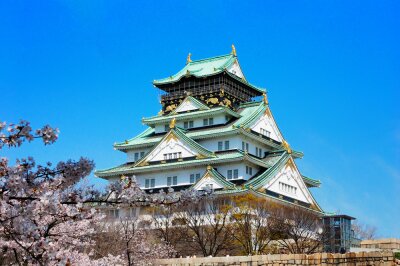 Three million residents make up Osaka, Japan’s third largest city and definitely one of its most colorful. Visitors are treated to a bustling landscape of action, bright flashing lights, and surprises around most corners. Famous as an electronics center, Osaka also blends in traditional sites and values, making it one of the country’s more pleasing metropolises to visit. Here are a few spots you’ll want to be sure to include on your trip (in alphabetical order):

This is the main tourist street in Osaka and for good reason. Seemingly every shop offers food and you could spend days munching until your stomach could take no more. Tsutenkaku Tower is the focal point, offering a central meeting point of sorts. Night brings with it neon lights, photo-happy crowds and an electric pulse in the air. A fun spot day or night!

Gaze up at the Kaiyukan Aquarium

Life under the sea is the draw at this world-class aquarium that packs in the crowds. Located at Tempozan Harbor Village, you’ll see all sorts of underwater creatures swim by as you walk through the aquarium’s glass tunnels. And when you’ve had enough of underwater life, hit up the Tempozan Ferris Wheel next door for sky-high views of the city.

Get cultured at the National Bunraku Theatre

Take in some culture in the form of traditional Japanese puppet-drama or bunraku. Performances typically feature two four-hour halves, so purchasing a ticket for one portion is more than enough puppet-time for most. English audio guides can be rented and are well worth it to help you understand what’s going on and get some bonus insight into the art form.

Explore world cultures at the National Museum of Ethnology

Take a trip through the world’s cultures with exhibits ranging from Bhutanese mandalas, to Japanese parade floats, African barbershop signs, and everything in between. It’s worth taking an audio tour, as there’s not much English signage. The larger Osaka Banpaku-kōen (World Expo Park), which the museum is located in, is also nice for strolling amid its many trees, hills and lakes.

Geek out at Nipponbashi

Known locally as Den Den Town, shoppers come to this lively shopping district to buy electronics, check out the latest cosplay fashions, and marvel at the many game arcades. Pedestrian streets are packed as shoppers buy comics, search for bargains, and sip coffee at cafes. You won’t find a better place to glimpse the neon-lit pulse of Osaka’s geek culture.

And now for something completely different: immerse yourself in the world of Japanese Edo farmhouses. Eleven structures are on show, pieced together from various structures throughout the countryside to showcase traditional Japanese farm life. Windmills, barns, and bamboo groves create a peaceful environment far away from the tourist masses.

Go back in time at Osaka Castle

Without knowing a lot about Japan, many foreigners would not think the country had a castle culture, but it does. Osaka Castle played a major role during the sixteenth century and makes for a nice cultural learning experience. The views from the top are killer as well. The larger park — ranked a top destination by Agoda.com customers — is nice for a stroll, especially during spring when the cherry and plum trees are in full bloom.

Feast on the delicious Okonomiyaki

Osaka’s most famous dish, often referred to as Japanese Pizza, okonomiyaki is super tasty. Sometimes prepared by diners themselves, and other times by the restaurant, this half pancake/half pizza is comprised of batter cooked on a hot plate that is filled with seafood, bonito flakes, and seaweed strips, then topped with mayonnaise and dark, sweet sauces.

Japanese love their onsen, or hot springs, and this place celebrates variations from around the world, in somewhat gaudy fashion. There’s a European zone, which has Roman, Greek and Finn examples, and you’ll find Persian and Balinese varieties in the Asian zone. A hotel, stone spa, salon, and restaurant make up this truly staggering complex of all things hot water.

Definitely the city’s most unique building, this twin-tower complex has a space-age design that seems to have been brought back from the future. The top five floors are accessed via a glass-covered escalator that hangs above an open section between the two towers. Not for those with weak stomachs! You haven’t seen Osaka until you’ve experienced Umeda in all its glass and steel glory.